Multi-Junction Solar Cells are the future of PV solar electricity generation. While the current industry average for solar panels is 12-18% efficiency, the latest multi-junction cells already offer efficiencies of 40% (for example, these 40% efficiency solar cells from Boeing subsidiary Spectrolab). 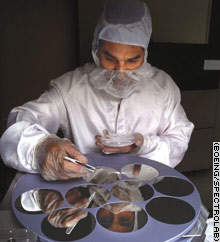 Common silicon PV solar cells can be understood by reading out short introduction to PV solar cells. Basically photons of sun light hit the cell and are absorbed and converted into electrical current. Around 85% of all solar cells manufacted today are still made in the this way with a p-n junction diode in a silicon wafer.
Sunlight is made up of a broad spectrum covering infrared to ultraviolet with visibleligh in between. Photons of light have different energy levels depending on the wavelength of sunlight they are carrying. Common silicon cells are designed to absorb visible light, however they do not do so very well. High energy blue light photons do not have all of their energy converted into electricity – some is converted into electricity and the rest is wasted as heat. Low energy red light photons on the other hand pass straight through the solar cell and are not absorbed at all. 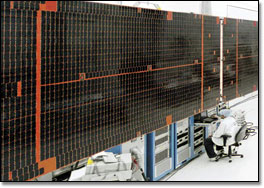 The ideal solar cell in theory would have hundreds of different layers, each one tuned to a small range of light wavelengths all the way from ultraviolet to infrared. Although this would lead to fantastic efficiencies of over 70% it is not possible in practice due to difficulties in manufacturing such complicated crystals. Therefore researchers have focussed their attentions on multi-junction solar cells with just a few different layers – and they are now managing to reach efficiencies of 35-40% with improvements to come.

The ordering of the layers of a multi-junction solar device are decided by their individual band gaps – i.e. the wavelengths of light they will absorb. On the top – closest to the sun – goes the layer with the largest band gap. Subsequent layers are then positioned in descending order of their band gaps. The highest energy photons (e.g. ultra violet to blue light) are captured by the top layer, and the bottom layer captures the lower energy photons (red to infra red) which pass through the other layers. 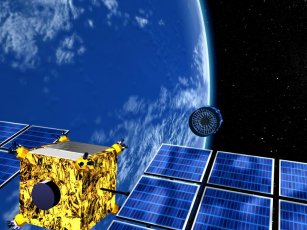 Though multi-junction solar cells are currently much more expensive than silicon solar cells due to increased manufacturing complexity, they are already seeing service in the space industry with communications satellites now generating double the power output with the same size of solar panel.