Nevada Solar One will be the first Concentrated Solar Power (CSP) plant built in the USA for fifteen years. The 64MW plant will generate enough electricity to power 40,000 households during the daytime and will join the 354MW of solar thermal power plants built in the Mojave Desert in the 1980’s as the United States’ only major CSP plants. The reduction in emissions thanks to using this clean electricity rather than fossil fuels will be equivalent to the removal of one million cars from the road.

The so called Solar Electric Generating Stations (SEGS) build two decades ago have performed extremely well, but the new Nevada Solar One will be more efficient and cheaper to build and run. The project is being developed by Solargenix Energy and will be the third largest concentrated solar power plant in the world. It should be operational and connected to the grid by March 2007. 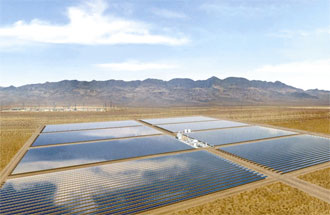 Nevada Solar One (see artists impressions is shown above) will cover 350 acres of the desert near Boulder City, Nevada south of Las Vegas. A total of 19,300 PTR-70 receivers (pictured below) will be supplied by German company Schott. These are the vacuum tubes which absorb the reflected sunlight which are placed inside parabolic mirrors which are to be provided by another German company Flabeg. 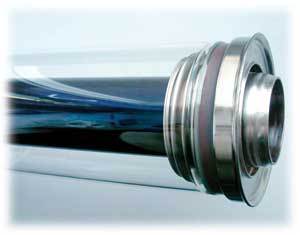 The solar energy absorbed will heat up the fluid contained within the receivers to 300 degrees celcius and that fluid will in turn be used to heat water into steam to turn a giant turbine and generate electricity. 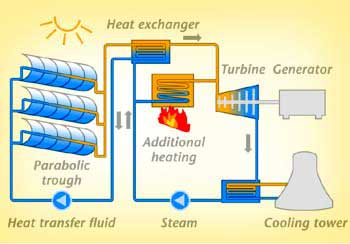 Pictured above is a schematic of how Nevada Solar One will work. The additional heating is provided by burning natural gas. This is used to prevent the heat transfer fluid temperature from fluctuating wildly during cloudy conditions. Although this is not a pure green energy generation scheme, the amount of gas required by the new plant is less than one-tenth that required by the old style Mojave desert SEGS. Just 2% of the heating requirement will come from natural gas – the rest from solar.

The total cost of the project is around $240 million which will price the electricity generated at around 9-13 cents per kWh. However, as more of these facilities are built that price will come down to as little as 7 cents per kWh which is very competitive with fossil fuels today. Even at current pricing, the electricity generated by Nevada Solar One will be the cheapest solar electricity produced in the world, although still more expensive than current wind power generation.

According to the US Department of Energy (DOE) there is enough suitable land available in the state of Nevada to generate 600GW of electricity with concentrated solar power. Currently the consumption of electricity in Nevada is equivalent to just 3% of this capacity which means that Nevada could sell vast amounts of electricity to nearby power hungry California.