A Power Inverter is used to convert low voltage direct current (DC) voltage (typically from a 12/24V battery bank or direct from solar panels or wind turbines) into mains power (220-240V AC in the UK, 110V AC in USA). This is very important as it permits you to power domestic appliances such as computers, televisions, lighting and so on from your renewable energy source.

Low voltage DC appliances are available and typically used in mobile homes and caravans, but they are much more expensive, need to be bought in addition to existing appliances, and much thicker cable is required to carry the electricity around. Therefore power inverters are used to enable existing domestic appliances to be powered by a low voltage DC source. Inverters with conversion efficiencies in excess of 90% are available, so little power is lost going from DC to high voltage AC. 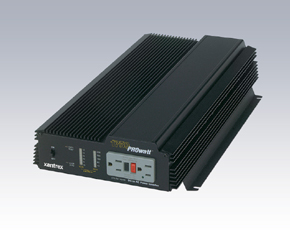 Click here to read our new article Pure Sine-Wave Inverters for more information about the difference between pure sine-wave and modified sine-wave inverters. 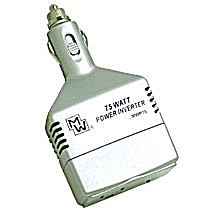 A suitably rated fuse must be fitted between the battery bank and the power inverter to protect against short circuits (if one of the cables connected to the inverter were to come loose for example). Click here to read our article Fuses for Power Inverters.

Buy an Inverter in the UK

An excellent source of a massive range of power inverters for all budgets and requirements is eBay. Click here to search eBay now for Power Inverters. On a typical day you will find over 4,000 inverters for sale with prices ranging from £0.01 (plus postage) to £2000, and with power ratings from 100W to 6kW.