There are many ways to generate electricity from the huge power of the tides: building tidal barrages, exploiting naturally occurring tidal streams, and tidal fences (a scaled down version of the tidal barrage). However, all of these techniques require huge financial investment and have very long pay back periods. In addition there are well documented negative environmental effects which have to be considered.

This leads us to look at tidal turbines. A tidal turbine acts underwater in a very similar way to how wind turbines operate in the air. Water is some 800 times denser than air, and so even slow moving tides can exert much greater forces than the wind on a turbine. Therefore a working tidal turbine can have much smaller diameter rotors than an equivalent power output wind turbine keeping costs of manufacture and transportation down.

The tides are much more predictable than the wind and so can be depended upon to supply power at certain times of the day. Wind turbines on the other hand depend on the vagaries of the weather. 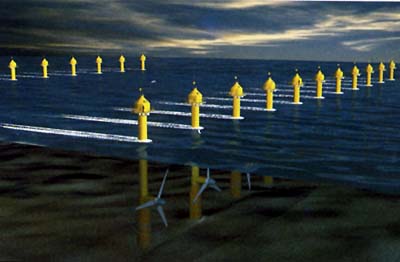 Tidal turbines are relatively cheap to manufacture. Any number of turbines can be built and installed at any time and so an underwater tidal turbine farm can be constructed and extended as and when funding is available. Underwater turbines are by definition out of sight and it is believed that their environmental impact is negligable thanks to their slow rotation rates of just 10-30 revolutions per minute (10 times slower than that of ships propellers). In addition, tidal turbines do not affect navigation or shipping and so there are no hidden extra costs to consider. 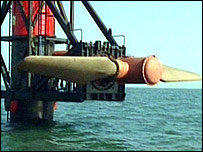 Presently many tidal turbines are being tested around the UK coastline and also around the world. For example read our article on the New York tidal power project in which a $20 million 200-300 turbine 10MW tidal turbine farm is under construction in the East River.

SMD Hydrovision – Have developed the TidEl system to exploit tidal streams and believe they can generate electricity at prices comparable to wind turbines. A one-tenth scale prototype recently went through 7 weeks of testing at sea successfully. The final system would consist of two 500kW turbines connected by a cross beam. Find out lots more about the TidEl System here.
Here are some links to websites of tidal turbine manufacturers and researchers:
Marine Current Turbines – Aim to have commercial tidal turbines available by 2008. Currently working on 15-20m twin axial flow rotors rated from 750kW to 1.5MW. Find out more about their Seaflow and SeaGen prototype Tidal Turbines here. (UK)
Tidal Generation Limited – Constructing 500kW prototype tidal turbines to anchor to the sea bed in fast flowing tidal streams. They predict costs of 8-9p / kWh of electricity produced at first falling to around 5p / kWh when scaled. (UK)
Verdant Power – Have developed the axial flow rotor tidal turbines currently being installed in New York’s East River. They call their system low impact hydropower. (USA)