A sump pit is sometimes found in the basement of homes here in the UK and around the world. It is quite simply a hole in which water collects – either from the drains of a basement waterproofing system, from ground water (if the basement is below the level of the water table), or from rain. 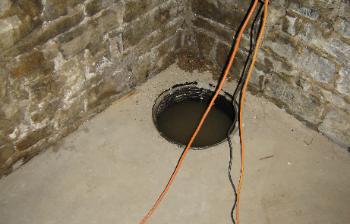 The water which accumulates in the sump pit must be removed from time to time before it has a chance to overflow and flood the basement. Therefore, a sump pump is usually fitted which pumps the water out and away from the property and into a storm drain. 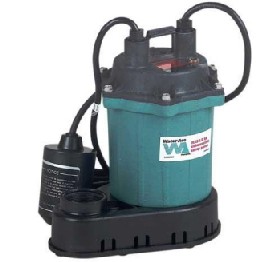 The sump pump requires a controller to automatically detect when the water in the sump pit has reached it maximum permitted level and to switch on the pump. In order to protect the pump from running dry (and potentially being destroyed), the controller must also detect when all of the water in the sump pit has been removed and therefore switch off the pump.

Commercial integrated sump pump systems are available, but they can be very expensive. In addition, they tend to be quite large and not suitable for use in many small sump pits.

If you want to put together your own DIY sump pit pumping system you can save a lot of money, but you’ll need a controller of some sort to manage everything reliably – particularly if you are using a small simple pump. As an added bonus it is easily affordable to keep a spare pump handy for the DIY system in the event of the original pump failing.

We used to put together a sump pump control system using a couple of the liquid sensors pictured above – one to be fitted a couple of inches below the top of the sump pit, and the second an inch or two above the water intake of the pump.

When the upper liquid sensor detected water, it started the pump, and when the bottom liquid sensor stopped detecting water, the pump switched off. The circuit – which is pictured below – worked very well in the workshop. 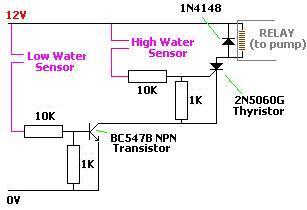 The controller itself is pretty simple. The key component is the thyristor which operates as a latching switch. When water is detected by the upper sensor, the switch closes (turning on the pump) and stays closed even when the water level falls below the sensor. When the water level eventually falls below the bottom liquid sensor, all power is cut off to the thyristor, and so it resets and turns off the pump.

Unfortunately, due to features of liquid sensors (covered in detail in our article Understanding Liquid Sensors) the circuit proved to be unreliable in practice. The main problem is that liquid sensors are not actually designed to be submerged in liquid for any length of time! The second problem is that they do not operate in the same way as a mechanical switch and so can continue to pass current even when they are bone dry. 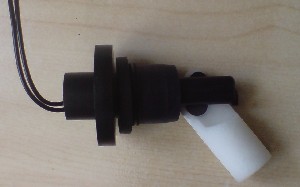 Using a couple of Float Switches (pictured above) in place of the liquid sensors, and modifying the circuit a little, it was possible to get everything to work reliably, however the limited space of a sump pit (which also contains a pump) makes fitting float switches securely quite difficult and therefore reduced reliability.

We decided to reduce the cost and complexity of the system by building a simple timer circuit taking advantage of the fact that the time taken for the pump to empty a sump pit is pretty constant. Instead of detecting when the sump pit is empty, we just detect when it is full, and then run the pump for a fixed time – sufficient to empty out the majority of the water without risking running dry. This design is particularly useful in sump pits which have space to fit only one float switch.

We recommend you measure the time taken for the pump to empty the sump pit ten times, calculate the average, and then set the timer for 70-80% of that average.

Pictured below is a basic float switch controlled circuit which will run the pump for a relatively fixed time when the float switch is triggered by high water in the sump pit. This circuit can easily be put together as a DIY project.

The time the relay (and therefore the pump) is ON is controlled by the values of the capacitor (C) and resistor (R). It also depends on the input voltage, the specifications of the relay, and the NPN transistors (Q1 and Q2) chosen.

Using one of the 6V relays from the REUK Shop, a 1000uF capacitor for C, a 15K resistor for R, a BC2338 NPN transistors for Q1 and Q2, and a 6V DC power source, the pump stays on for 7 seconds after the water level has started to fall. Doubling the value of the resistor (or that of the capacitor) will effectively double the the pump running time.

Using a variable resistor for R enables the timer to be adjusted and the pumping time to be fine-tuned. 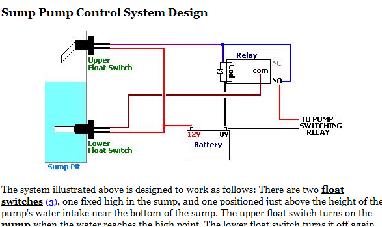 NEW In the rest of this article we discuss electronic sump pump controllers which are ideal for situations in which there is space for only one float switch. If you have space for both an upper and a lower level float switch in your sump pit, click here to read about our NEW Simple Sump Pump Controller design which uses two float switches, two relays, NO electronics, and is an easy DIY job.

The circuits described above are great for a one off, but what happens if you replace your pump with a faster/slower model later? In addition, quite a lot of experimentation is required to get the circuit set up optimally. Therefore the sump pump controllers which we now sell (see details below) are built around a small microprocessor. This gives greater timing accuracy and flexibility. In addition, it is possible for the user to programme their desired pumping time quickly and with no need for any technical ability or electronics knowledge. 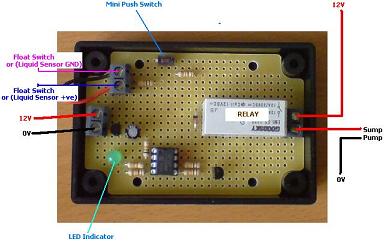 If you would like to purchase a bespoke programmable sump pump controller contact neil@reuk.co.uk with details of your exact requirements. Prices start from just £13.99 and we have liquid sensors and float switches available for sale.