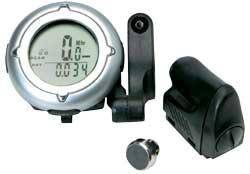 Cycle computers are basic electronic devices which are used by cyclists to measure their speed and distance covered. A small magnet is fitted to one of the spokes on the front wheel, and a sensor to the front fork (the inverted U-shaped metal which holds the wheel in place). 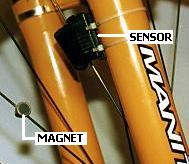 Every time the magnet spins past the sensor it sends a signal to the main computer which is usually fixed to the bicycle’s handlebars. Since the diameter of the wheel is known, speed and distance covered can automatically be calculated and displayed for the cyclist.

In essence a cycle computer is already an RPM sensor. However to use it as such we have to undo the clever calculations which the computer does to display speeds and distances.

Since different types of bicycles have different diameter wheels (e.g. 26 inches on mountain bikes, 27 inches on some racing bikes etc), cycle computers let you input the diameter of the wheels of your bicycle. To use the computer as an RPM sensor we simply set the wheel circumference to 166.66 cm, and display the speed output in km/h. When the computer displays a speed of 20.6 km/h, it is measuring 206 RPM. When it displays 31.6 km/h, it is measuring 316 RPM, and so on. Just ignore the decimal point and you have a very accurate measure of RPM rotational speed. 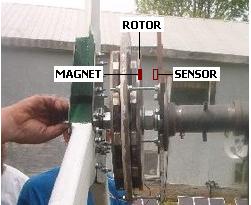 The range of the cycle computer magnet sensor is very short, therefore it is not practical to stick the magnet on the end of one of the turbine blades and the sensor on the turbine mast. Instead the magnet should be superglued to the edge of the permanent magnet generator or alternator, and the sensor to the wind turbine mounting bracket in such a way that the rotating magnet passes in front of the sensor without touching it.

Cycle computers do not just display the current speed – they also store the average speed and top speed recorded. Therefore you can leave the cycle computer fitted to the wind turbine all night and next morning find out the average RPM and the top RPM recorded during the night. This is a very useful feature – and particularly interesting the morning after heavy gales.

Cycle computers are available in both wireless and wired versions. The wired versions are cheaper, but will require you to extend the two-core wire (using cheap bell wire) down the length of the mast to where the cycle computer will be mounted and viewed. The wireless versions are more expensive and will not always have sufficient range to allow the computer at the bottom of the mast to detect the transmitted pulses from the sensor at the top of the mast. 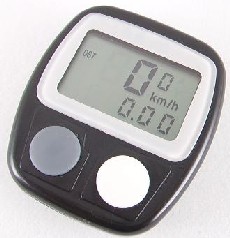 The cycle computer pictured above costs just £0.99 plus £4.00 for postage from Hong Kong (on eBay). It is a wired-computer, includes the magnet and sensor, and the wheel circumference (166.66 cm in our case) can be manually entered very easily.

Cycle computers are all waterproof to a certain degree, however the better (and more expensive) computers have better waterproofing and will last longer when left out in the elements.