A wind turbine generator is made up of two major components – the turbine blades which are spun by the wind, and an alternator which converts wind energy into electricity. While it is possible to purchase a sealed alternator unit, it is not particularly difficult to make your own alternator using neodymium magnets and magnet wire. 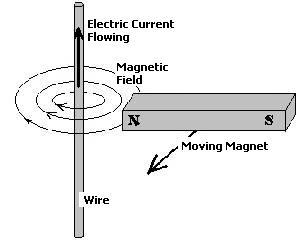 If instead of a single wire (pictured above), we have many individual wires, the same current of electricity will be generated in each wire. Since it is not practical to have lots of connected individual wires in an alternator, coils of wire are used instead.

Ideally you want each radial leg of a coil to be over a magnet at the same time – one leg over a north pole and one over a south pole – to maximum current generation. 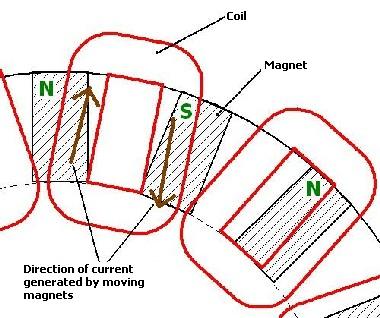 The voltage output by an alternator made of coils and magnets is therefore Alterating Current (AC), with the direction of the current changing every time the legs of the coils pass over a magnet. 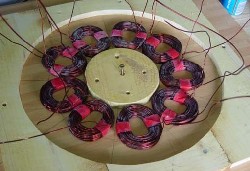