Unlike PV solar panels, wind turbine generators do not scale downwards well. While large wind turbines can generate huge quanties of electricity very efficiently and relatively cheaply, as the size of the wind turbine is reduced, efficiency reduces and cost per Watt power jumps enormously.

Windbelt offers an alternative for small scale wind power generation dispensing with the turbine altogether while producing power at a (claimed) efficiency of 10-30 times greater than that of a similarly rated wind turbine. 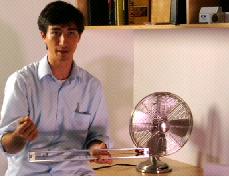 Windbelt is an innovation of Shawn Frayne (pictured above) a 28 year old inventor from California, USA. Looking at ways of cheaply generating under 50 Watts of electricity to power LED lighting and radios in the homes of the Third World poor, he realised that conventional wind turbine technology does not scale down well because of the increasing significance of friction in the various components – gearbox, bearings, etc.

Dismissing rotary power, Frayne instead considered the phenomenon made famous by the wind induced destruction of in 1940 of the Tacoma Narrows Bridge (aka Galloping Gertie) in Washington. (click here to watch a video of the collapse of the bridge on YouTube.)

This phenomenon known as mechanical resonance (or aeroelastic flutter) was responsible for the dramatic collapse of the Tacoma Narrows Bridge. As the wind blew across the suspension bridge, the bridge oscillated moving up and down and twisting with great violence until in the end the bridge destroyed itself (killing a three-legged paralysed dog called Tubby).

Frayne developed a simple device with a taut Mylar membrane fitted with a pair of Neodymium magnets that oscillate in and out of coils of magnet wire because of the mechanical resonance of the taut membrane with wind blowing across it. At wind speeds of 10 mph, the prototype membrane oscillates at 90-100hz – i.e. the magnets move in and out of the coils 90-100 times per SECOND.

As we explained in our article Make a Wave Powered Generator, when a magnet moves in and out of a coil of wire, electrical current flows through the wire, and therefore Windbelt generates electricity.

The current (45.5cm long membrane) prototypes can only generate 40mW in a 10mph wind – not a lot of power when compared with the latest handheld wind-up technology used in clockwork radios and torches (15+ Watts in the some Freeplay models for example) – however an easy to maintain array of Windbelts could be put together to generate as much power as is required.

The current Windbelt prototype will generate electricity in winds over 4mph and at attack angles of up to 60 degrees. As the wind speed increases from 4 to 14 mph, the power ouput increases at a rate close to a cube of the increase in wind speed (see Calculation of Wind Power). At windspeeds above 14 mph however the power output becomes constant.

One way around this would be to dynamically increase the tension in the taut membrane as the wind speed increases. Shawne Frayne is currently experimenting with larger belts with the hope of increasing the 4-14 mph (bandwidth) to a far more useful 4-24 mph. 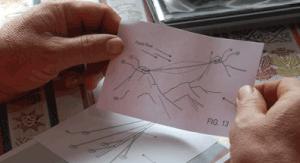 The image above shows one potential design for a large scale wind energy harvesting device. A dynamic tensioning system would be essential for such an installation.

Windbelt is mechanically very simple, and the components can be purchased cheaply pretty much everywhere around the world. Unlike a photovoltaic solar panel or commercial micro wind turbine generator, Windbelt can be maintained and repaired by just about anybody.

A further important advantage of Windbelt over existing micro-wind turbine technology is that it is good at taking power from turbulent wind flows of the type likely in the locations where it is to be used, i.e. in a built up domestic setting, and it is also very quiet in operation.

Windbelt has won Shawn Frayne a 2007 Popular Mechanics Breakthrough Award. A video of Shawn Frayne discussing Windbelt can be viewed by clicking this link: Windbelt Video

Windbelt (TM) is owned by Humdinger Wind Energy LLC. Clicking the Humdinger link will take you to the Humdinger website where you will find more information about the Windbelt and future developments.