The world’s largest concentrated solar power plant started operation on Sunday 17th March 2013.  Costing US$600 million to build, Shams I is located in the desert in the west of Abu Dhabi. The 100 Megawatt power plant will supply electricity to more than 20,000 homes in the United Arab Emirates. 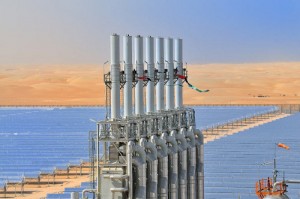 Covering 2.5 square kilometres, Shams I is an array of 768 solar tracking mirrored parabolic troughs which concentrate the sun’s energy onto a pipe running through the troughs through which oil is pumped. This solar heated oil then passes through a heat exchanger generating steam which drives an electricity generating turbine. More than 250,000 mirrors were used in the construction of the parabolic solar collectors. 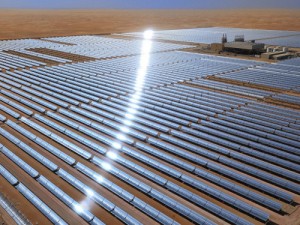 Shams I has a dry-cooling system which greatly reduces the amount of water this power plant will use – a vital feature considering its arid desert location. Dry-cooling uses the air to condense exhaust vapour from the steam turbine instead of water. Water cooling is cheaper where possible/practical, but the best geographical locations for solar generation unfortunately tend to be very dry places. It is approximately 5% more expensive to build a concentrated solar power plant with dry-cooling, and the electricity generated will be 10% more expensive than from a water cooled power plant.

At US$600,000,000 for 100,000,000 Watts of installed power, it sounds quite expensive – US$6 per Watt, but perhaps it was all of the associated infrastructure which added to the cost rather than the choice of solar concentrator technology over simple solar photovoltaic technology.

Comparing the costs of this solar concentrating power plant with solar photovoltaic power plants of equivalent size, the Rovigo PV Power Plant in NE Italy cost 276 million Euro for 72MW of installed PV capacity when it was built in 2010 becoming briefly the World’s largest PV power plant (US$5 per Watt), but since then the much larger 145MW Neuhardenberg Solar Park in Germany was constructed for US$365 million, or just US$2.50 per Watt.

At the time of writing only 30 from 384 of these monocrystalline panels remain for sale at a super competitive £89.95 so snap them up quickly before they sell out: 100W Monocrystalline Solar Panel.