Pictured below are the inner workings of a cheap digital watch which has been modified to enable remote operation of the buttons so it can be used for automatic stopwatch timing. 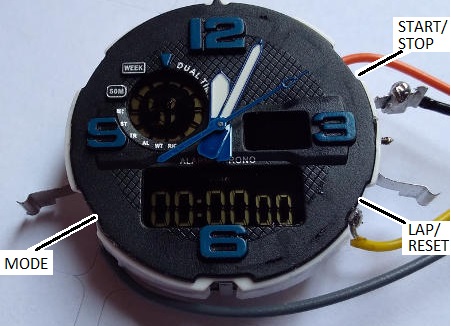 This particular watch had a broken backlight and broken strap, but it had always kept very good time. Therefore it was a perfect candidate to be re-purposed.

The watch had rubber button tops integrated into the watch case. When the workings are removed from the case, the buttons themselves are exposed. They comprise a thin strip of metal separated from a metal pad on the watch PCB. When the rubber button top is pressed down, the metal strip makes contact with the metal pad making an electrical connection. 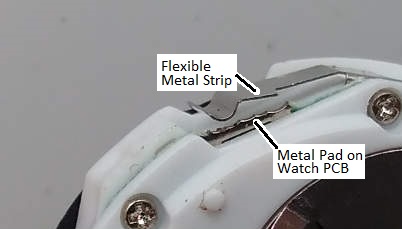 We soldered wires to the three metal pads of the buttons we wanted to control, and a ground wire to one of the commonly connected metal strips. Shorting the end of this ground wire to the end of any of the other wires causes the relevant button operation to take place. 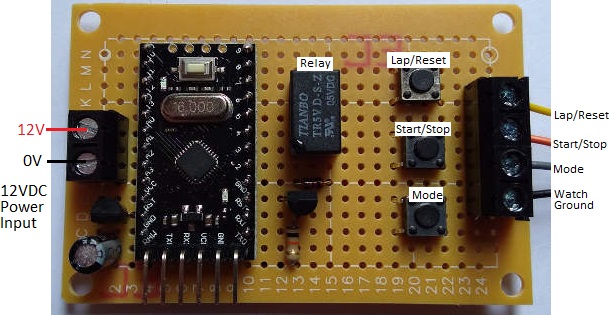 We next made the above pictured board. We put three tactile switches on the board and wired them up so that when pressed, they would short a mode button input to ground. These tact switches make it much easier to interact with the wired-up watch manually.

The final component is an Arduino Pro Mini in a socket. This board will be used to calibrate the internal clocks of Arduino Pro Mini clones as their crystals are not accurate enough for some of the projects we build.

(Note that we are powering this board with 12VDC for convenience as that is the voltage we use for all of our testing rigs with a bench power supply, but for a one off it would have been 5VDC powered – 4 AA cells for example.)

The Arduino code above is used to briefly energise the relay which starts and stops the stopwatch. We used a 50 millisecond delay so that the relay has time to energise (physically close its internal contacts) and button presses of under 20 milliseconds were ignored by this watch. When someone presses a button, they typically keep it held down for from 30-70 milliseconds, so we replicated that.

To roughly measure how long is 10 seconds for the Arduino, we used the following code:

The delay() function is not accurate in general since we do not know how long the loop execution time is. Instead for accurate time testing we use millis().
Replacing delay(10000); with the following:

For calibration we test for a minimum of 8 hours, but sometimes 12 or 24 hours. The longer the test, the greater the accuracy of the results and therefore the better we can calibrate the Arduino’s internal clock.