We have recently finished work on a new solar water heating pump controller to be used where the array of solar water heating panels is split between an East and a West facing roof instead of the more typical single South-facing (in the Northern Hemisphere) solar array. This controller has been based around our 2014 Solar Water Heating Pump Controller with Display with some additions and changes. 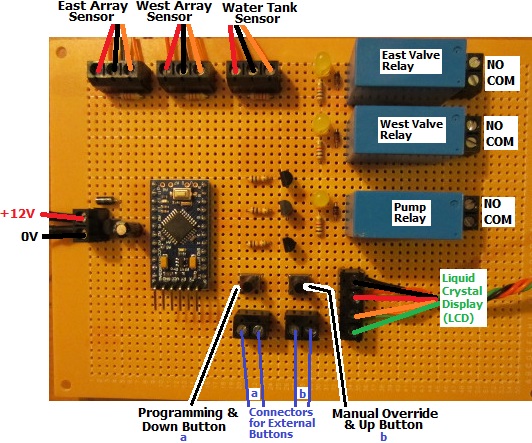 This controller has connections for three waterproof digital temperature sensors – one for the East array, one for the West array, and one for the hot water tank (or pool).

The customer for this controller did not want to have the water flowing through both solar arrays at the same time to prevent heat collected on the hotter sunny side of the roof from being immediately radiated away from the cooler side. Therefore his system features two solenoid water valves which, when the pump is turned on, will ensure that water only flows through the hotter of the two solar heating arrays.

In the above photograph, the valve on the West side is open, and the west solar array is +5.8 degrees Celcius hotter than the hot water tank. When this temperature difference falls below 4 degrees (diffOFF), as the East array is relatively cool (just +1.2 degees hotter than the tank) the West valve will close, the pump will turn off, and the display will now show diffON – the temperature difference required before the pump can be turned on again. (If the East array had been hotter than the tank by more than diffON at this time then the pump would keep going, the East valve would open and the West valve would close).

This controller also has a manual override facility which lets the user force the pump to run with the East valve open, the West valve open, or even both valves open at the same time – for example while testing. The values of diffON and diffOFF can be set by the user as per the standard 2014 solar water heating pump controller.

If you need a controller like this (or any other solar water heating pump controller), please email neil@reuk.co.uk with details of your exact requirements.