These are the instructions for putting together the 3 Phase Bridge Rectifier Kit available from the REUK Shop. Please read them through fully before starting to assemble your bridge rectifier kit. 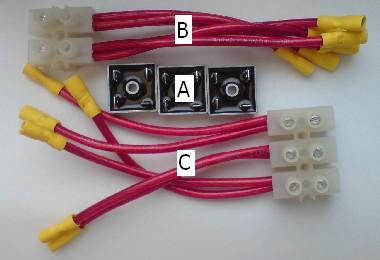 The kit is made up of three main components. Three MB356 35 Amp Bridge Rectifiers (A), one positive/negative connector (B), and one three phase connector (C). 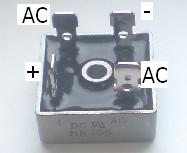 The positive/negative connector has three wires coming out of each of two terminal blocks. The three negative wires are marked with a ring of black insulating tape. The other three wires are the positives.

The three phase connector has two wires coming out of each of three terminal blocks.

The yellow insulated crimp connectors fitted to the end of each wire are all labelled with either I, II, or III indicating the bridge rectifier to which they should be connected. 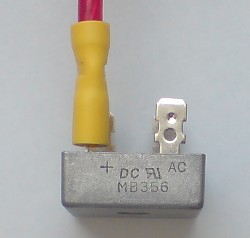 It is very simple to connect your new bridge rectifier into your renewable energy system.

The three live wires from your wind turbine or other AC electricity generator should be inserted into the three holes on the three phase connector and locked in place by tightening the locking screw. Which live wire goes into which hole is not important.

The supplied bridge rectifiers are very robust, however you need to be careful. The connected wires give a lot of leverage and so it is possible to accidently bend a bridge rectifier leg. This will not cause the bridge rectifier to fail however repeated bending of a leg may eventually lead to metal fatigue and component failure.

When selecting a heat sink, SIZE MATTERS. The bigger the better. Ideally squirt some heat sink compound between the bridge rectifiers and the heat sink to help the generated heat to dissipate. The heat sink pictured in these instructions is small for three bridge rectifiers. However, with each bridge rectifier given a heat sink such as this (reclaimed from an old Pentium II PC and easily available for 10p or 20p at car boot sales etc), then it would cope well with higher currents.