Unlike most of its North African neighbours Morocco has negligible gas and oil reserves to exploit. It does however have a near perfect geographical location and climate for solar power.

This month work started on the first of a series of huge solar power plant construction projects which by 2020 will have a generation capacity of 500 Megawatts and cover 3000 hectares. Located by the desert city of Ouarzazate 200km drive from Marrakesh, this concentrated solar power (CSP) plant will eventually meet the electricity needs of the city’s 1.5 million residents. 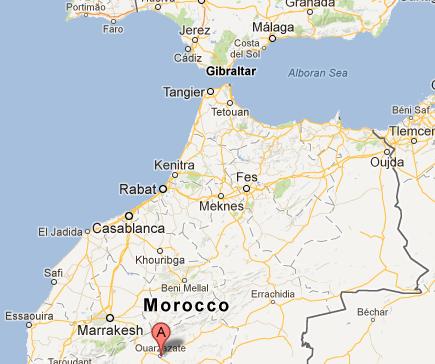 Phase one is a 160 MW solar power plant to be built by a consortium led by Saudi company ACWA Power. The contract for the second phase will be awarded later this year which will raise total capacity up to the targetted 500 MW.

Morocco are planning to construct five such solar power plants over the next 10 years giving it a generation capacity of 2000 MW at a cost of around US$9 billion. Funding will come from The World Bank, the African Development Bank and the European Investment Bank.

Morocco are aiming to generate over 40% of the country’s total power needs from renewable energy sources by 2020, with additional plans for huge investment in wind farms along their windy Atlantic coastline to mix with the solar to give it renewable electricity generation night and day.

If these projects are all completed and others are developed, it is likely that Morocco will look to export clean electricity to their European neighbours, a model likely to be repeated across North Africa and something we looked at back in 2008 in our article Solar Power for Europe from the Sahara.