If you have had an electricity meter installed in the last few years, and certainly if you taken advantage of the feed in tariff to have a solar PV installation, your electricity meter(s) will be electronic with an LED which flashes. The rate of this flashing is proportional to the amount of power passing through the meter, and so useful information is there to be collected.

If you have a grid-tied renewable energy system with an export meter with the flashing LED, then the rate of flashing can tell you when you are exporting surplus electricity and also the amount of power which is being exported. The information from just that LED can be used to set up automatic systems similar to our Surplus Solar PV Immersion Controller to turn on an immersion heating element or household appliances to use electricity immediately when it is generated instead of exporting it and then having to pay to import electricity later in the day. 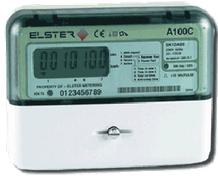 Pictured above as an example is an A100C single phase kWh meter which is commonly installed in the UK. To the right hand side of the meter reading is a small LED together with some writing as pictured below: 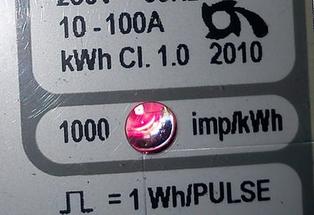 This type of meter will always be labelled in this way with a certain number of Imp/kWh. Imp/kWh is short for Impressions per kWh (unit) of electricity which passes through the meter where one ‘impression’ is a brief flash of an LED.

The majority of meters are labelled 1000 Imp/kWh which means that the LED will flash 1000 times for each kWh of electricty which passes through. The rate of the flashing of the LED tells you how much power is currently passing through the meter.

It is more likely that you will want to measure the rate of flashing, and from that calculate the power going through the meter. This can easily be achieved by reversing the calculation above as follows:
Power (kW) = 3600 (secs in 1hr) divided by (the seconds between flashes * number of Imp/kWh printed on meter)

(To measure the number of seconds between flashes it is best to start timing on a flash, and then time how long for 10 more flashes. Divide that time by 10 to get the average number of seconds per flash. Obviously this only works if the power is constant – if someone turns on the kettle half way through your time measurement the results will not be valid.)

If you are interested in automating the process of counting the LED flashes, and/or if you have experience at using microcontrollers such as PICAXE or Arduino, or programming Raspberry Pi, and want to either log the flash rate for analysis or use the rate to make immediate decisions about whether to turn on appliances, then a simple light dependent resistor (LDR light detector) can be used. (See here for our guide to Logging Data from Arduino to a PC which is useful for a huge range of diverse projects.)

The electricity meter is owned by the utility company and so cannot be modified in any way. Therefore a reliable but non-permanent way has to be found to position the light detector over the LED and shield it from ambient light. Pictured below is the way that one of our customers achieved this – it is by far the best way we have come across or used. 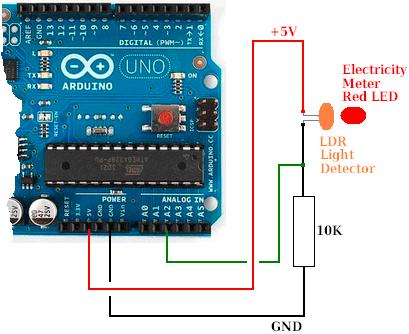 Pictured above is a schematic of how an Arduino Uno can be used to detect if the electricity meter LED is on or off. The Arduino can be programmed to work out the flashing rate and depending on that rate open or close relays to control appliances.

Contact neil@reuk.co.uk if you are interested in an example of an Arduino sketch (the code) used for this application.