Hong Kong is massively polluted and uses huge amounts of energy but has until now shown little interest in renewable energy. 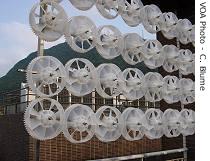 Wind power had been ignored because despite occasional Typhoons, average wind speeds over most of Hong Kong are very low. Currently Hong Kong has only one conventional 50 metre wind turbine generator which generates power just 13.5% of the time. 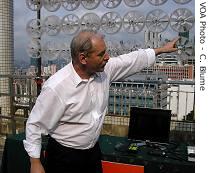 Lucien Gambarota (pictured above), a product developer for Chinese toy factories has developed a small (just 26cm in diameter), injection moulded polymer plastic wind turbine module which will generate power in winds of just 2 m/s. He believes arrays of these mini-turbines can be mass produced and linked together in framed arrays sized to fit on balconies, roof tops, or on top of hills. He calls each mini-turbine a gearwheel, and says that by linking many of these gearwheels together more electricity can be generated.
Because the cut in speed of this system is much lower than with conventional wind turbines, it will generate power 80-90% of the time.

MotorWave Limited, Mr Gambarota’s company has joined with Hong Kong University (HKU) to launch the new technology with prototype systems to be installed on the roof of the Hong Kong Sea School in April 2007 and later at WWF Hong Kong. Currently a set of 20 26cm gearwheels costs just $25, but Mr Gambarota suggests that with mass production the price will fall even further – particularly when 46cm gearwheels go into production.

“Let’s say if you have good conditions, five, six meters [of wind] per second, if you are a family with one kid you need most probably three, four square meters of that then you can most probably cover at least 60, 70 percent of your [energy] needs.“

Looking at the figures released at the recent MotorWave Press Conference by MotorWave Group, at wind speeds of 5 m/s, an array of 20 turbines (1 square meter) is predicted to generate 15 Watts of power, and at 10 m/s 125 Watts.

Mr Gambarota however states that:

“we have 44% efficiency at the best and we are using only 26% in our calculation for consumer products because we can not fully control the battery charging“, and adds that “we announce that we can generate about 15 watt /m2 for 5 m/s wind and 125 watt/m2 for 10m/s even-though we have nearly double of that in lab“.

The absolute maximum possible efficiency of a wind turbine is 59% and is known as the Betz Limit.

Almost certainly this invention will not prove practical for commercial use in Hong Kong. There just isn’t sufficient wind, and what wind they have on rooftops and balconies is very turbulent because it is such a built-up region. (Read more about the problems associated with the roof mounting of wind turbines here). While it is good to be able to generate power from winds of just 1-2 m/s, the amount of power which can be generated is tiny – 1 watt for a 20 turbine array in winds of 2 m/s.

However, on sites with consistent strong winds from one direction a robust version of this system could potentially generate a decent amount of power very cheaply thanks to the large total swept area of a turbine array.

The UK Windsave 1000 wind turbine for example has a 1.5 metre diameter rotor sweeping an area equivalent to 35 of Mr. Gambarota’s gearwheels. At Mr Gambarota’s quoted price of “250 US$ /square meter” an equivalent system would cost under £250. We do not currently know if that quoted price includes the alternator and associated components, or if that is the price just just for the gearwheels and frame.