One problem with most types of renewable energy generation is finding ways to ensure that electricity is available when it is needed. For example, wind turbines may turn all night when electricity demand is low, and then not turn at all when demand is high during the day.

In order to have electricity available when the renewable source is not, it is necessary to find a way to store energy – for example, by pumping water uphill when renewable power is available, and then releasing it through a turbine generator when electricity demand is high.

In this article we will look at one way in which heat collected during the day can be used to generate electricity at night.

Concentrated solar power (CSP) systems typically use an array of parabolic mirrors to concentrate the sun’s rays to generate heat which can make steam which can turn a turbine and generate electricity. Examples of large scale commercial CSP generating facilities include SEGS and Nevada Solar One in USA, and Andasol-1 in Europe. An alternative form of concentrated solar power is the solar power tower in which a vast array of mirrors focus the sun’s rays onto a central receiver at the top of a tower. 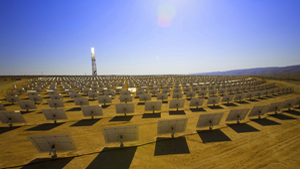 CSP offers cost effective green electricity in hot sunny countries well suited for use in air-conditioning systems since peak power generation occurs at times of day when air conditioning is required most – i.e. during the afternoon. However, when the sun starts to set in the evening (and air conditioning units are still pumping away) there will no longer be any electricity available unless a way is found to store some heat.

Molten Salts as a Heat Store

The molten salt typically used* in renewable energy applications is a mixture of 60% sodium nitrate and 40% potassium nitrate (aka saltpeter). This mixture melts at 230 degrees Celcius into a liquid which can be pumped around a concentrated solar system, and passed through heat exchangers (to collect heat from sunlight, and turn water into steam) etc. Molten salt is non-toxic and also non-flammable so it is very safe to use, and it flows much as water does.
Common table salt (sodium chloride NaCl) is not used as its melting point is over 800 degrees Celcius.

The molten salt acts effectively as a solar heat battery. By keeping the hot molten salt in a well insulated tank it is possible to generate solar electricity at any time of night and day, and to store solar energy for up to a week after it was collected.

When water freezes (i.e. goes from liquid to solid state) it expands. That is why water pipes can burst during the winter. Fortunately molten salt contracts when it returns to the solid state and so will not damage any pipework or equipment if it cools down.

Pictured above is a schematic showing how molten salt is used with a solar power tower as a heat store (image from National [US] Solar Thermal Test Facility). In this example, the molten salt is kept at at least 550F (290C) in the cold storage tank, pumped up through the receiver at the top of the tower where it is heated to over 1000F (537C), and pumped to the hot storage tank. The hot molten salt is then passed through a steam generator to create steam which turns a turbine to generate electricity. Long after the sun has set, the stored hot molten salt can be used to generate electricity.

Click here to find out how to build a concentrated solar water heater.