An H Bridge is a electronic circuit which has an output voltage which can be in either direction. This is particularly useful when used with motors as reversing the polarity of the power supply to a motor causes it to rotate in the opposite direction.

In our article Automatic Hen House Door Controller we showed how  a pair of relays could be used to achieve this polarity reversal for motors, as making an H bridge can be a bit complicated and mistakes tend to lead to destructive short circuits. Fortunately now there are many ready made H bridge boards available relatively cheaply which make everything a lot simpler for the DIYer. 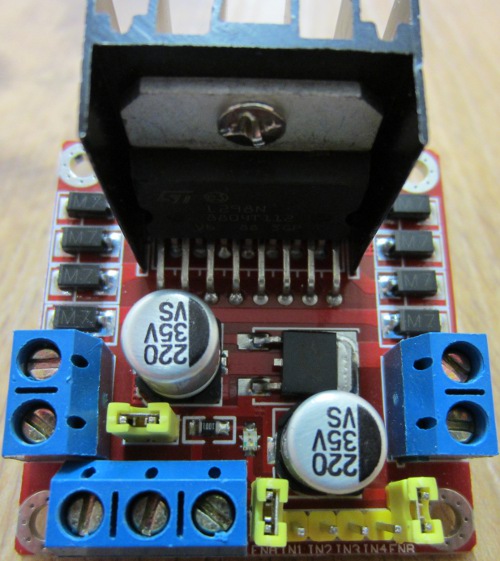 Pictured above is one such H Bridge circuit. Like most it is actually a dual / double H Bridge and so it can be used to control the direction of motion (and on/off status) of one or two motors.

The row of three screw in-terminals pictured at the bottom of the image are for the +12V and GND input connections, and a +5V output connection respectively. The +5V comes from an onboard 5V regulator which can be used to directly power a microcontroller such as an Arduino or Picaxe which would usually be used to control the motor(s).

It is not actually necessary to use a microcontroller – microswitches and resistors can be used to control the motor(s) in some simple applications. 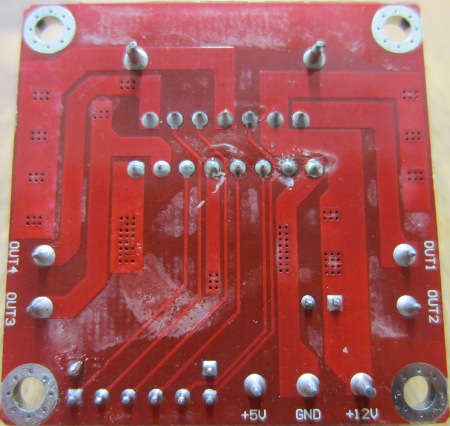 This H Bridge circuit is based around the L298N from ST Microelectronics – a dual full bridge driver which can supply up to 2 Amps of output current to each motor.

Click here to purchase one of these: Dual H Bridge Boards. Prices start from just £2.50 including delivery (air mail from China – 3 weeks) to up to £10 from UK sellers. As it typically costs around £5.00 to purchase just the L298N chip from electronics suppliers in the UK, these boards are great value and speed up project development no end.