Pictured below is one of our rainwater toilet flush pump controller units which we have had to modify to overcome a problem with interference. 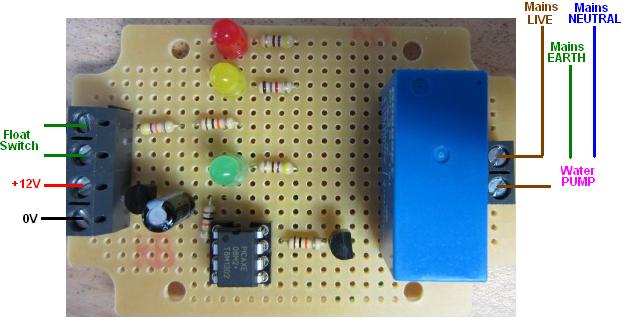 The customer had a problem with the original unit we supplied due to the length of the cables running to the float switch in the header tank – more than 10 metres. This controller is designed to check the status of a float switch at the top of a header tank every two hours. If the header tank is found to not be full then the pump is turned on until it is full, pumping water from a water butt at ground level up to the header tank which gravity feeds the toilets.

The way we had programmed the original unit, the float switch had to remain high on the full water level continuously for one second before the pump would be switched off. Unfortunately during that one second of multiple measurements, at least one measurement was getting scrambled by interference resulting in the pump staying on continuously.

For the new modified unit, the controller tests the status of the float switch 10 times every half a second, and if more than seven of those readings are high, the controller will turn off the pump.

There are ways that we could have suppressed the interference problem with modifications to the hardware, but as we could not test the controller on site we chose a software method which we have found to work well previously – particularly in Eastern and Southern Europe where they seem to have more interference problems than here in the UK.