The Power Inverter is often a key component of all but the smallest off-grid renewable energy systems. The inverter takes the DC voltage from a battery or battery bank (typically 12, 24, or 48 VDC) and converts it to an AC voltage similar to that provided by mains electricity (110 VAC in USA, and 220-240 VAC in most of the rest of the world).
A Grid Tie Inverter is different in that it is connected directly to the electricity supply so no batteries are required.

The Importance of Fuses

It is wise to always include a suitable fuse in every connection from the battery bank to an appliance. The fuse is there to protect against short circuits and for overload protection. If at any time the current flowing through the fuse exceeds the rated value of the fuse, it will automatically cut off the power supply. Without a fuse a short circuit can cause a fire or even make batteries explode since the huge currents involved release vast amounts of stored energy.

A power inverter is no different from any other appliance – a fuse should be inserted into the postive cable from the battery bank (as close as possible to the battery bank) to the inverter.

Standard fuses range in values from a milliAmps up to around 35 Amps. These fuses are very cheap since they are mass produced and standard in the automotive industry. (We for example used to sell 20 Amp Fuses with a rugged holder, connecting leads, and an integrated LED indicator light for under £2.00) which was suitable for lots of renewable applications. However power inverters however typically draw currents far in excess of the standard fuse limit of 35 Amps and so much larger, less standard, and therefore much more expensive fuses are required.

Pictured above is a typical (250 Amp) power inverter fuse. The fuse itself is the white disk in the centre connected to a couple of bolt on terminals. A plastic cover is provided for the fuse holder to keep dirt and dust off, and also to protect against accidental short circuits (for example caused by dropping a metal ruler or screwdriver across the terminals). The package as pictured costs around £30 in the UK.

Selecting the correct value of fuse for any given inverter is not always easy – take a look at the instruction manual for the inverter to see if a DC fuse value is specified. Otherwise you will need to estimate.

For example, a typical 1,000 Watt power inverter can supply up to 1,000 Watts of 240 VAC (in the UK) electricity at around 95% efficiency. Therefore at least 1,050 Watts of power will be drawn from the battery bank when the inverter is being used to its maximum.
If the battery bank supplies 12 Volts DC, then Ohm’s Law tells us that the current is given by dividing the power by the voltage – 1,050 / 12 = 88 Amps.

However most 1,000 Watt rated inverters are designed to supply 2,000 Watts for a short period (10 seconds typically) in order that appliances such as pumps which need a burst of high current to get started can be used. Within 10 seconds a standard 100 Amp fuse would have long since burnt out, and so a 200 Amp fuse would have to be used for such an inverter. BUT, specialist inverter fuses have two ratings – a continuous rating and a blow rating. With this type of fuse, a 100 Amp continuous rated fuse would be perfect.

Obtaining inverter fuses in the UK used to be quite difficult and they were very expensive. However, there are suitable alternative fuses which are designed for use within large vehicle electric systems with long wire runs where short circuits are a big risk – Mega Fuses.

Pictured above is a 125A Mega Fuse available in the UK for around £3.00. As with all Mega Fuses, the blow rating is double that of the continuous rating making them perfect for use with inverters. This 125 Amp fuse could easily be used with a 1,000 Watt rated inverter connected to a 12 Volt battery bank. 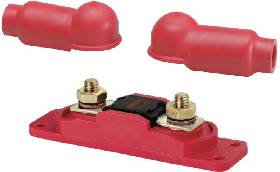 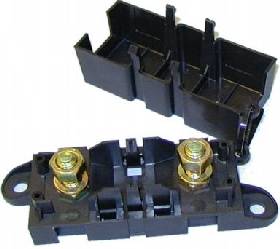 Every time the fuse fuses – i.e. is broken by excess current – it has to be replaced. If this happens often, it can get very expensive and so a non-disposable / reusable equivalent is required. These are called circuit breakers, power breakers, or trip switches and they are commonly found in home electricity consumer units rated at around 30 Amps. High power DC circuit breakers are available for a wide range of uses, and these can often be used with power inverters.

Pictured above is a 250 Amp DC Breaker for use with Xantrex power inverters. When a current in excess of 250 Amps passes through the breaker it trips the switch. The circuit can then be switched back on manually after the reason for the current surge has been identified and fixed. 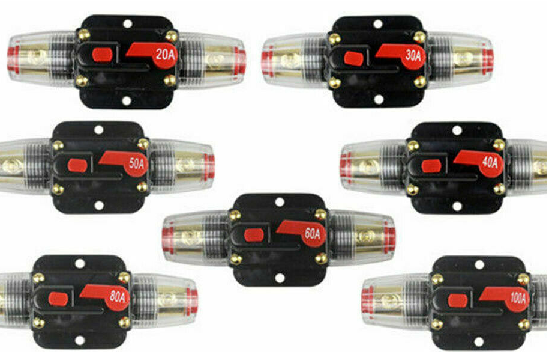