A Reed Switch is a very simple device which is very useful in many renewable energy applications. Within the reed switch are two wires which are not in contact with one another. When a magnet passes close to the reed switch, the two wires are brought together allowing electrical current to flow through the switch.
NEW We are now selling Reed Switches in the REUK Shop from just 74p each. 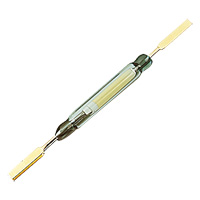 The primary use of reed switches in renewable energy is in developing simple and cheap RPM meters – devices which detect and count each rotation of a wind turbine. The speed of rotation (measured in revolutions per minute or RPM) can therefore be calculated. This method is slightly more complicated than simply using a cycle computer based RPM-meter however a basic RPM meter can be constructed easily for just two or three pounds.

A small magnet is fitted to a rotating part of the wind turbine in such a way that it passes close enough to the reed switch, which is located in a fixed position, that the reed switch is triggered each time the turbine completes one revolution. All that then remains is to find a way to count the number of times the reed switch was triggered per minute and you know the RPM rotational speed of your wind turbine.

It is not necessary to build a complicated electronic circuit or spend a lot of money to process the reed switch pulses. The most basic calculator or pedometer (step counter) can be used with very little modification.

If a wire is soldered or otherwise connected to each of the two points, and those two wires are then joined together across a reed switch, everytime the reed switch is triggered by a passing magnet the calculator microprocessor will be told that the button has been pressed.

Most calculators have a repeated addition function. Enter ‘1+1=’ into the calculator and ‘2’ will be displayed as the answer. Press equals (=) again and again, and if the calculator is suitable it will count up 3, 4, 5, etc. If it does not then you cannot use that calculator as an RPM counter.

Simply enter ‘1+1’ into the calculator, start your stop watch and time the spinning wind turbine for one minute. Subtract 1 from the figure displayed on the calculator and that is the average RPM of your wind turbine.

A pedometer or step counter also makes for an excellent RPM meter. Unfortunately each pedometer is different so it is not possible to explain here where the two contacts are to which you must attach the two wires joined by the reed switch. However, a bit of poking around with the two ends of one piece of wire should result in the displayed pedometer count increasing. 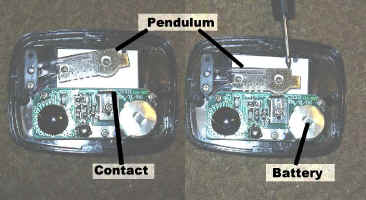 Inside a pedometer is a small counter hammer (pendulum) swinging back and forth in time with walking motion. At the end of each swing it hits a contact – sometimes a small spring – closing the circuit and increasing the pedometer count by 1. Attach the reed switch between the counter hammer and the contact and each time the magnet passes by the reed switch the pedometer count will be incremented.

Pedometers have the advantage over calculators that you do not need to enter 1++1 before you start the count each time – you simple press the reset count button and the device is ready.