Windsave small wind turbine generating systems are also known as Small Scale Embedded Generators (SSEGs). The Windsave wind turbine generates electricity which is then plugged in to the building’s ring main supply suitable for UK 230 Volt AC 50 Hz applications. Pictured below is the electronic conditioning system which cleans the generated electricity so that it can be used in the home. 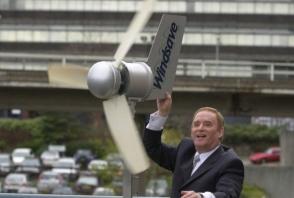 Update – September 2009 Windsave Ltd went into receivership in September 2009 after their product was dropped by B&Q in the face of many customer complaints. The Energy Saving Trust drew attention to the fact rapidly discovered by disappointed customers that in urban locations turbulence from nearby buildings and trees coupled with low mean wind speeds rendered this type of domestic wind turbine effectively useless. The founder of Windsave David Gordon claimed that the failure of the business was due to the problem of getting planning permission to install the wind turbine generators. 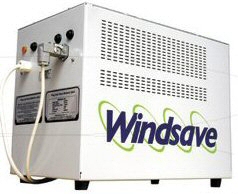 Small wind turbine generator systems such as the Windsave 1000 are designed to be installed on homes and so are designed to generate minimal vibrations and noise. The Windsave 1000 nominally generates 1kW at 12 metres per second wind (27mph), and starts generating power as soon as the wind is over 4 metres per second. Turbulent wind and lower wind speeds result in far lower power outputs.

What makes the Windsave product so user friendly is that the wind energy generated can be plugged directly into the mains system with a standard 13A plug – therefore there are no batteries to maintain or house. However, any energy generated that is not used is lost and not stored for later use. It really is a case of use it or lose it.

Grants are available from the DTI’s Low Carbon Buildings Programme which may save customers from 30-50% off the installed cost of the system. However, even with a grant, it is highly unlikely that the Windsave 1000 will pay for itself in under a decade, and when you factor in maintenance and other costs, it may never pay for itself during its 25 year design lifetime. This sadly is one of the main disadvantages of this type of Roof-mounted Wind Turbine Generator with no battery storage of unused electricity.

Therefore, if you want to cut down on your carbon dioxide emissions, you have £1,000 burning a hole in your pocket, and you want an easy hands-off way into the world of renewable energy, consider investing in a Windsave 1000.

It is worth remembering though that the vast majority of people could easily cut their household electricity usage by a quarter (as promised by Windsave) with a few energy efficicient lightbulbs, a bit more insulation, and by not leaving devices on standby!