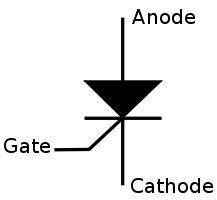 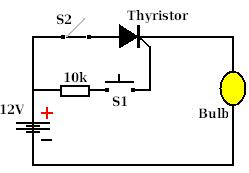 Pictured above is a very simple example thyristor circuit schematic. When the momentary push button S1 is pressed, current flows through the resistor into the gate of the thyristor. This allows current to flow through the closed S2 switch, through the thyristor anode to cathode, and on to turn on the light bulb.

When the push button is released, the light bulb stays on, and will stay on until the switch S1 is opened cutting off the current to the thyristor anode. When that switch is subsequently closed again current will no longer flow from anode to cathode so the light bulb will stay off (until push button S1 is pressed again).

In the real world, the push button could for example be placed under a doormat to turn on a light or sound an alarm to show that an intruder has entered a building. It could also be used in a sump pump controller or well pump controller, with S1 and S2 replaced by float switches, and the light bulb replaced with a pump or a relay to switch a pump.

There are many different types of thyristors available for all different application voltages and maximum currents. Click here to buy thyristors now.