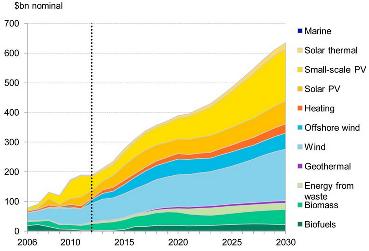 There are an every increasing number of companies listed on the London Stock Exchange relating to renewable energy. Here are a selection of these companies in no particular order (details last checked and updated February 2010):

Renewable Energy Holdings PLC (REH)
Investors in the worldwide renewable energy market. Projects included wave power (CETO I and CETO II), wind power (wind farms in Germany and Poland), and a landfill gas powered power station in Wales. During 2009 CETO was sold to Carnegie Wave Energy Limited for 33% of the issued share capital of Carnegie, and the Bryn Posteg landfill gas site was sold in January 2010 to Sundorne Products (Llanidloes) Limited to generate general working capital (of £2-3 million). Now REH are focussing on wind assets in the UK and Europe with the goal to have an established 300MW portfolio and 1500MW in development projects by 2012.
Website: Renewable Energy Holdings.

Rurelec (RUR.L)
Rurelec are building energy generation projects in Latin America (currently Bolivia and Argentina and looking to expand into Chile and Peru), particularly focussed on generation in rural areas and the electrification of areas currently off the grid system.
Website: Rurelec.

Renova Energy (RVA.L)
Renova Energy is an Ethanol producer based in USA. Share trading was suspended in 2007 due to the company encountering severe financial difficulties.
Website: Renova Energy.

Biofuels Corp (BFC.L)
Biofuels Corp are Biodiesel refiners. Their first biofuel processing plant, Teeside I, was opened in the summer of 2006 by the Prime Minister Tony Blair at Seal Sands. It had an output of 284 million litres per year and there were plans to open further plants and remain one of Europe’s leading biodiesel producers. However in November 2009 the 75 workers at the refinery were sent home ‘indefinitely’ and the refinery was shut down. Was delisted from AIM in 2007 and is now 100% owned by Barclays (debt-for-equity swap).