Pictured below is a solar water heating pump controller which we recently made for use within a system which has two solar collectors – one on an East-facing roof and one on a West-facing roof. 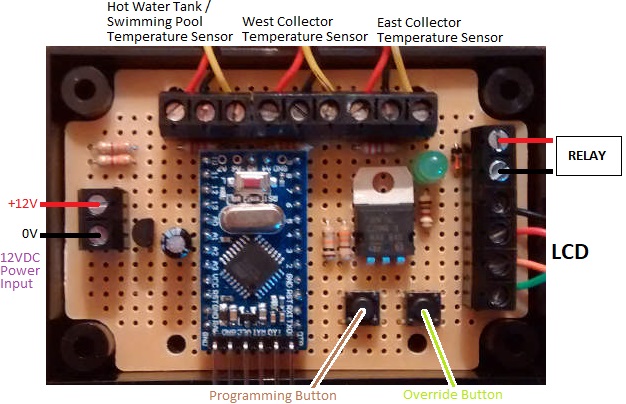 We have previously made an East West Solar Water Heating Pump Controller for use in a more complex system which controlled valves which were used to select whether to take solar heated water from the East or from the West-facing collector. The above pictured controller however is just based around our 2014 Solar Water Heating Pump Controller, with the additional of a third sensor and a modified display output.

The water in the system is pumped from the tank or pool, up through both solar collectors in turn, and back again in a loop. Therefore, this simpler version has the disadvantage that water from the hotter collector (or from the tank/pool) may cool a little in the colder collector as heated water flows through it. However, overall the system is pretty efficient considering the disadvantage of having to face collectors to the East and West instead of to the more optimal South (in the Northern Hemisphere) due to the orientation of the building.

If you need any kind of solar water heating pump controller, please email neil@reuk.co.uk with details of your requirements.